“It’s a fine line between being adventurous and being reckless…” 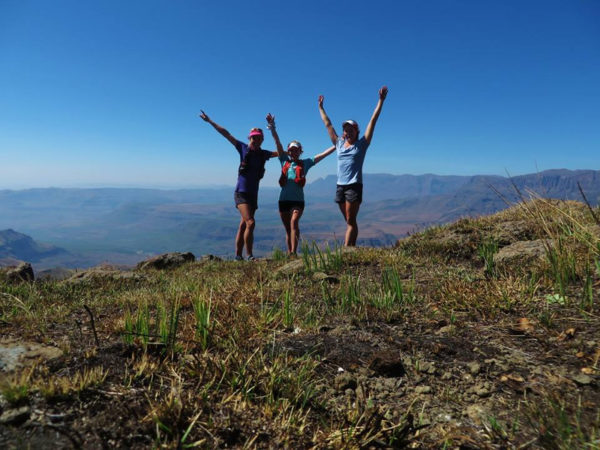 Last month my two friends, Landie Greyling and Robyn Owen, and I decided to book ourselves a girls’ week away in the Drakensberg, the largest mountain range in South Africa. By girls’ week, I don’t mean pretty hair, cute nails and pampering. Girls’ week for us entailed daily summits of various mountain passes, rock scrambles, river swims, ridgelines, evening fires and yes – a girly glass of wine or two before crawling into our sleeping bags at 7.30pm, exhausted. We started our week with maps, ideas and going back and forth between a million different options of places to explore on the mountain. We finally decided to kick off our adventure at Mnweni Cultural Centre. Robyn and I know the area well, but Landie (a Capetonian) had never had the chance to get to know it. Sharing a place like that, with a person like Landie – with her talent, passion and love of mountains – was very special; it was like seeing it through fresh eyes.

The Tent
In all the excitement of choosing routes, we didn’t manage our sleeping situation very well, and only packed one tiny two-man hiking tent. The ever-gracious-and-up-for-an-adventure Robyn immediately offered to sleep outside and leave us the tent to ourselves as she was quite keen to test out her new super warm, down sleeping bag. So each night when Landie and I crawled into our cozy tent, we listened for sounds of a freezing cold Robyn outside. All we ever heard was contented deep breathing so we knew she was happy! 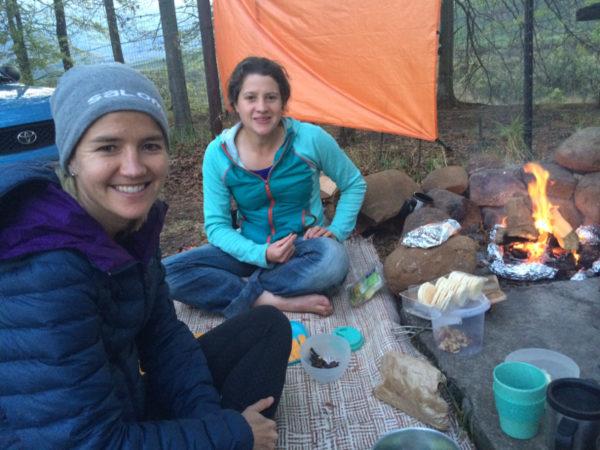 We spent the first day in suspense as the bucketing rain and cloud cover prevented us from seeing the towering peaks around us. We also knew from the chill in the air that snow was imminent so we waited patiently until morning for the proper adventure to start. And what a morning it was…

The Adventure Begins
With the sun slowly rising and illuminating its orange glow on the surrounding peaks, we set off through the villages towards a snow-capped summit. We were lucky enough to have team navigator Robyn guide us through the route. She’s got the mountain eye, and the ability to choose perfect lines, contours and river crossings. And for the most part (except for that one time we won’t let her forget) she kept us out of brambles and scrambles. 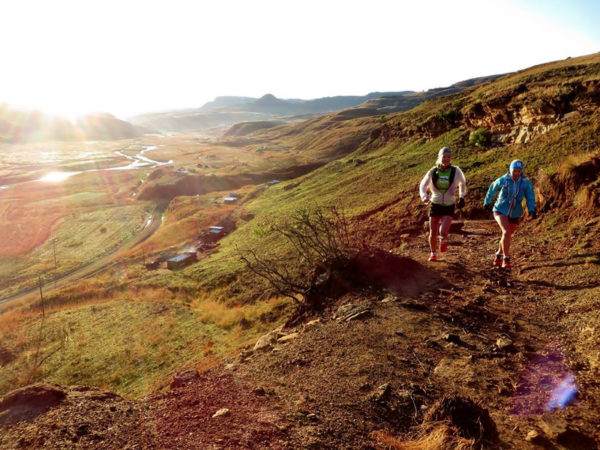 The Summits
Soon, the icy bits became snowy and as we made our way up the pass, we all fell into an awed silence – accompanied by the squeak and crunch of our footsteps in the snow. The summit was a soft thick blanket of snow, and soon we were hurling snowballs at one another. Our screeches and whoops echoed off the peaks. A few snowmen later, we began the descent down Rockeries Pass towards camp. 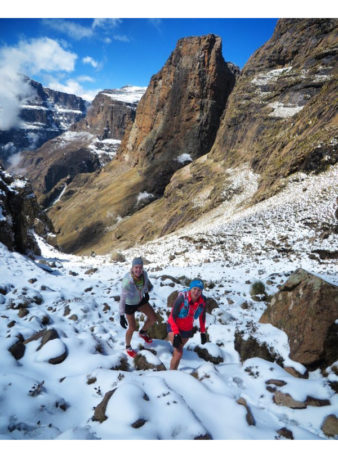 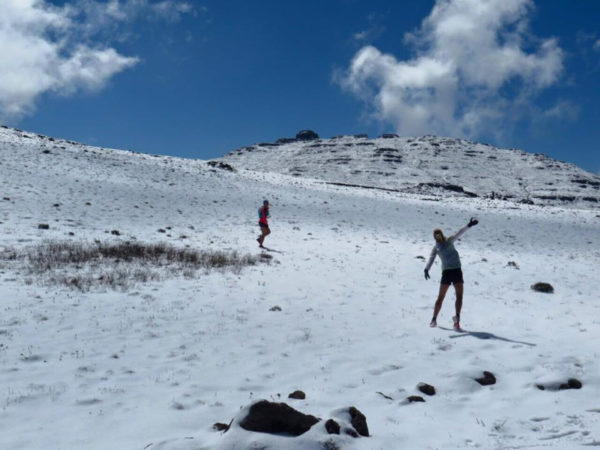 The beautiful Cathedral Peak, which rises 3004m above sea level, was chosen as summit number two. The path leading to the summit is an absolute spoil and pure showcase of the Drakensberg, with incredible views of the lower slopes and endless grasslands. It was a slightly slower ascent than the previous day but we finally reached the rocky scramble that would take us to the summit. Unfortunately, the rock was wet and slippery from the snow and rainfall. After lengthy debates and lots of scouting for alternative routes, we decided to turn back. It was the safest decision as we didn’t have any rope or protection on hand. It’s a fine line between being adventurous and being reckless, and it often takes a lot more willpower to turn back than carry on. Safety should always be the number one rule. We settled for a ‘pretend summit’ photo and enjoyed the beautiful descent to camp. 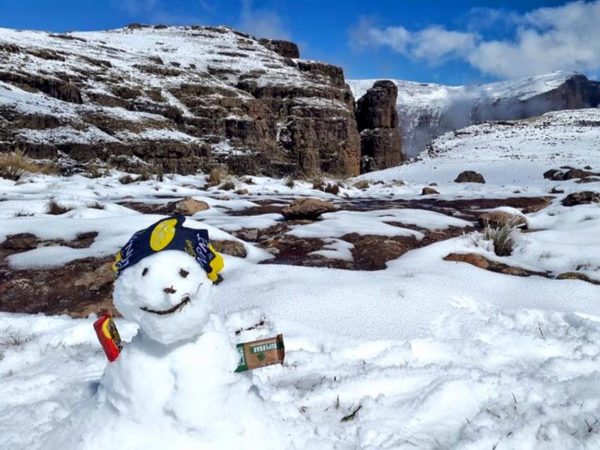 The Rhino Peak was our last summit. This part of our trip was to raise awareness and funds for the Bearded Vulture breeding program and the Rhino fund. Leading on from the 2015 World Rhino Day, the initiative was for ten elite athletes to race up and down the iconic, 3000m peak to set a new fastest-known-time, while people pledged money on how fast they thought the athletes could do it. Read more here.

On arrival we were treated to the wonderful hospitality of Drakensberg Gardens Hotel. On the day of the Rhino Peak Challenge, we woke up to howling winds and were warned of even stronger winds on top. They couldn’t have warned us enough! The gale force wind blew down the gully at full force and whipped us around at the top. At one point, a gust actually blew me right off my feet and I did a few somersaults before I was able to regain my balance! Nevertheless we broke the existing records. Landie and Holly Page, both avid trail runners, even broke the existing men’s record, flying home in 2 hours and 45 minutes! Our efforts were worth it and R300 000 was raised for the Endangered Wildlife Trust. This was just the best way to end such an unforgettable week. 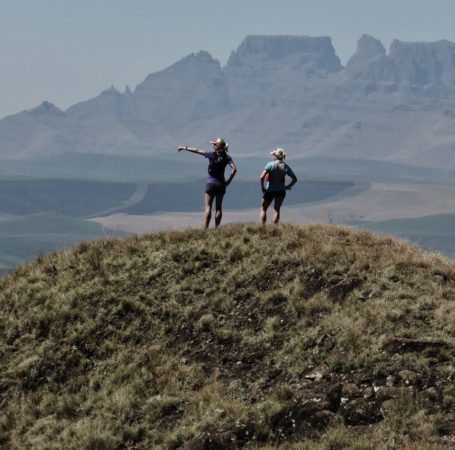 Our week in the mountains reminded us that the simpler one lives, the better. All you need are some special, adventurous friends and a map or two. We ate just enough to fill our tummies, kept warm enough to be comfortable, played, laughed, ran, explored and appreciated our beautiful country. I can’t wait for what the next girls’ week holds. 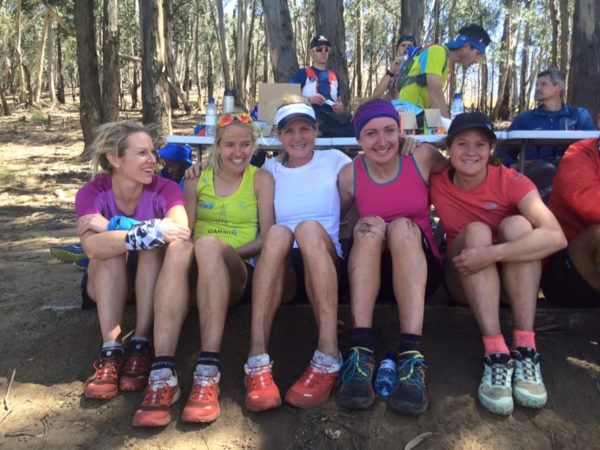 Plan your trip:
Do your homework before you go –  in the Drakensberg there are plenty of peaks to summit, caves to sleep in and rock pools to swim in. For more information click here:
Cathedral Peak
Mnweni
Rhino Peak:

Megan Levinson is a South African athlete with a passion for adventure, mountains and trail running. In 2015 she won the SA Long Distance Trail Champ, she’s a 3x African X winner (2013-2015), a record-holder of the Rhodes Marathon and the Mnweni Marathon and she represented South Africa at the Mountain Running World Marathon Championships. Follow Megan on Twitter at @Meg_Mackenzie86, on Instagram at megmackenzie1 and on her website at www.megmackenziecoaching.co.za.