We slip into a trance-like state as we dance the night away to the sensual beats of Maloya.

It’s our last night on Réunion Island, a French territory situated a few nautical miles east of Madagascar. As its name suggests, Réunion is a melting pot of Asian, African and European cultures. Today it is dubbed the adventure capital of the Indian Ocean Islands and thanks to our blond blue-eyed guide, Nicolas Cyprien, my two travel companions and I have trekked through the gigantic Cirque de Mafate, overlooked one of the most active volcanoes on earth and cliff-jumped our way along a river in a jungle. 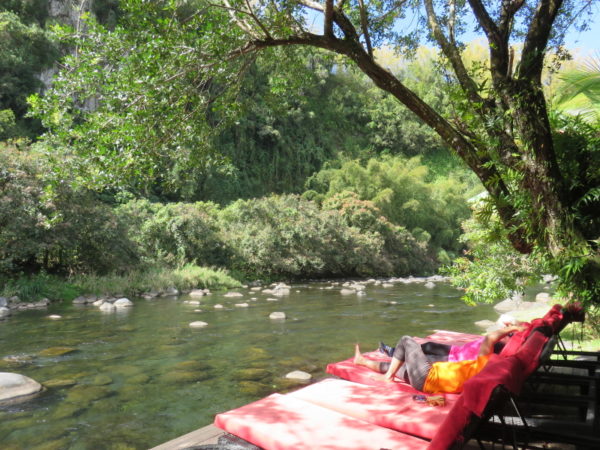 Nicolas is determined to end our last night on a high note and opts for Chez Aliette et Paris, a family-owned Creole eatery situated along an elevated and winding road on the west coast. We’re welcomed by the owners of the restaurant – a husband-and-wife team – and handed cups filled with apple-and-cinnamon-infused rum. Resembling a farm-style warehouse and finished in Victorian frill, Chez Aliette et Paris is a favourite local haunt for food, drink and music. Just as we settle into a second glass, four musicians and a local woman in a white dress take to the corner of the room. One man starts by shaking a kayamb, a tray-like instrument constructed from cane stalks, and soon the percussionist follows suit. The beat starts gently and rises into something that hovers between danger and urgency. I find it hard to sit still. The woman in white fluffs out her skirt like a swan, and seductively starts to roll her hips from side to side. Maloya music (traditionally played by men) and dance (performed by women) are inseparable and they make for an intoxicating blend. 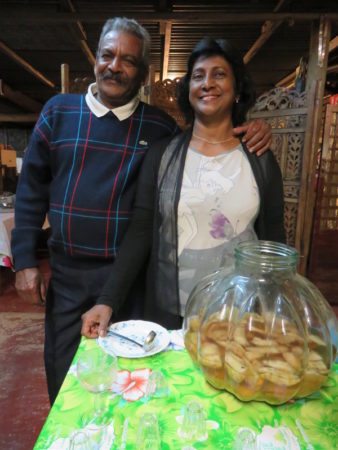 Finding its roots among the African and Malagasy slaves who were brought to the island in the 19th Century, Maloya music (alongside Séga) is the indigenous Creole genre of Réunion. Much like Flamenco music written by the Spanish gypsies, traditional Maloya music expresses feelings of homesickness and poverty. In the past Maloya was played during religious ceremonies to invoke the ancestors and commonly sung by workers cultivating sugar plantations. The trance-like rhythms and often politically-driven lyrics of Maloya posed a threat to the Catholic Church and the French government, which led to the genre being banned up until the sixties. It was illegal to own Maloya instruments such as a roulér (barrel drum) or a bobre (musical bow), but musicians nevertheless pursued their art beyond the public eye. The traditional form of the genre relies only on percussion instruments and the musical bow, but today the djembe, the guitar and the triangle are played by Maloya musicians who liberally experiment with blending Maloya with séga, zouk, afrobeat, reggae, rock and samba – the latter being a genre it closely resembles. In 2009 Maloya, as a musical genre, was added to UNESCO’s Representative List of Intangible Cultural Heritage of Humanity. 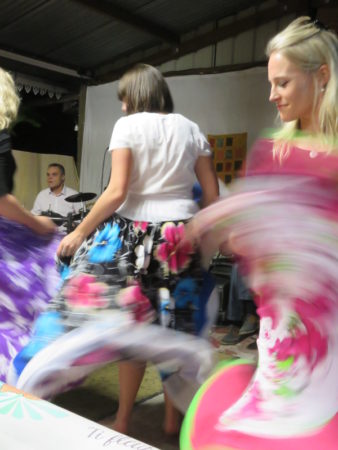 We finish a traditional Réunionese chicken curry on corn rice. Guitarists start playing with the percussionist and the atmosphere grows increasingly electric. Two of the musicians are behind microphones, passionately calling and answering one another in Creole song. The rhythm swells to a crescendo and I feel as if I could easily slip into a trance reminiscent of tribal Africa. The woman in white beckons us to approach. We’re reluctant at first, but she hands us three floral skirts to slip on and we succumb. It’s clear that she wants company on the dance floor. Considerately the musicians reduce the tempo, while we follow the dancer’s feet. The beat speeds up and soon I find myself lost to Maloya with my arms twirling in the air, my hips swaying and my body turning around and around. My friend shouts over the music, “This place makes you feel free!” Nicolas takes the microphone and starts singing in French Creole. The musicians know just what to do and it’s clear that there’s a shared understanding among the locals when it comes to Maloya. The extraordinary journey of this genre reminds me of the power of music to polarize, survive, uplift, transcend, liberate and ultimately to unite people.